This week (September 22 – 29, 2019), classroom teachers, librarians, and libraries across the country are honoring the American Library Association Office of Intellectual Freedom’s annual Banned (and Challenged) Books Week. When I served as a secondary school librarian, this week was one of my most treasured. For those three years, I collaborated with 8th grade (one) and high school English language arts classroom teachers to spotlight the 100 Most Frequently Challenged Books from 2000-2009. (I look forward to the 2010-2020 list!)

I gathered as many as possible children’s and young adult books from 100 Most Frequently Challenged list from our library and interlibrary loaned through the public library. (There were a few titles that were not appropriate for the school environment such as Private Parts by Howard Stern.) We launched the lesson by helping students make connections among these three terms and books written for youth: banned, challenged, and censored. Students who had read Ray Bradbury’s Fahrenheit 451 made connections and often led the discussion.

The classroom teachers and I co-read one of the picture books from the list and modeled a conversation about why the book had been challenged. Then, students working in small groups were given a short stack of books and the task of discussing each one to determine why they thought the book had been challenged. Students read picture books and book jacket information for novels to guide their thinking. Their ELA-R teachers and I facilitated these discussions by monitoring students’ conversations and asking probing questions.

Each group reported to the class by selecting the most surprising book in their stack and shared their determination for the “reason” the book had been challenged. One of the biggest takeaways from this lesson was that students had read a good number of these books in the past and where annoyed or shocked that any adult would think they were incapable of thinking critically or shouldn’t have even be allowed to read the story or information. 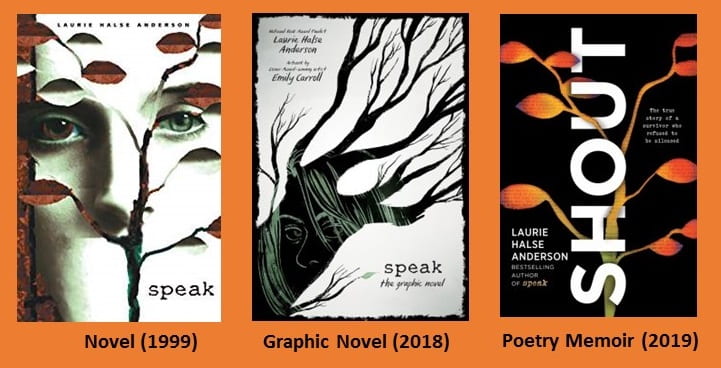 Laurie Halse Anderson’s Books
Laurie Halse Anderson’s book Speak appears as #60 on the 100 Most Frequently Challenged Books from 2000-2009. I have been a fan ever since the book was published… and this year read both the graphic novel version and her latest book Shout. It isn’t often that readers have such a powerful example of three texts—one novel, one graphic novel, and one free verse memoir—to compare their responses to the “same” story told by the same author. Anderson has given us all a gift with Speak (1999), Speak: The Graphic Novel (2018), and Shout: The True Story of a Survivor Who Refused to Be Silenced (2019).

Speak, the Novel
I read this book when it was first published. In 2002, I facilitated a student book club at Sabino High School. (It was my first year as a high school librarian after serving in elementary school libraries for ten years.) The students in the club were freshmen and sophomores. I provided students with a stack of books for which I could secure multiple copies. They picked Speak as our first read. I sent home information to students’ families about the book club (we met once a month during lunch) and noted the list of nine books the students had chosen to read that year.

Of course, I suspected that Speak would be an important book for the young women in the group. Protagonist Melinda’s experience, silence, inner turmoil, and trauma were clearly and poignantly conveyed in the story. What surprised me, at the time, was that the young men in the group were equally affected by Melinda’s story. Anderson’s voice rang true and authenticity created an invitation for readers to relate to the story on an emotional level. Students’ discussion was open and frank. It was an outstanding beginning for building our caring and thoughtful community of readers.

Speak, the Graphic Novel
Emily Carroll’s illustrations in the graphic novel add another dimension to Anderson’s story that may help some readers relate more deeply to Melinda’s story. The black, white, and sepia tones of the illustrations portray the fear and suffering of a freshman girl who has been raped and shunned. Her isolation and depression are vividly drawn. When Melinda finally takes the opportunity to strike back at the rapist, the image of her punching him captures the emotional power of finding one’s courage, using one’s strength, and protecting one’s self from further harm.

The parallels with the acts of superheroes will not be lost on readers. Carroll, who is known for penning horror comics, was the perfect pick to illustrate Anderson’s modern classic. The graphic novel format with brief text, frames that sequence and chunk the text, and drawings that pack an emotional punch will bring many new (and returning) readers to this text.

Shout, the True Story of a Survivor Who Refused to Be Silenced
And finally, for me, Shout, the free verse memoir brings Laurie Halse Anderson’s first-hand experience with abuse, rape, and resilience into an even sharper focus. Her intimate poems about family dysfunction, microaggressions (a word I didn’t “have” when I first read Speak), and most importantly of all, ending the shame associated with sexual assault will tear at your heart. As a woman, mother, and grandmother, I wept for young women who have suffered and continue to suffer in silence and must find resilience without family or societal support.

With today’s #MeToo movement, I believe all three “versions” of Speak/Shout provide a rich literary experience for critical conversations. But from my personal perspective Shout was the most powerful of the three. For me, Anderson’s memoir presents undeniable truths from which I, the reader, could not turn away.

Thank you, Laurie Halse Anderson, for your courage in breaking the silence, for openly sharing your life experiences, and for your heartfelt truth telling.

As you honor and celebrate The Freedom to Read and The Library Bill of Rights, this week and 365 days a year, school librarians must recommit to advocating for and protecting students’ rights. Our library materials reconsideration policies are a place to begin. Please read Mona Kirby’s article that appeared in the September issue of American Libraries: “Up to the Challenge: Dealing with School Library Book Challenges Before They Happen.”