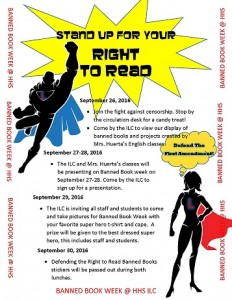 As AASL President Audrey Church notes: “Intellectual freedom and the right to privacy have been with us throughout the history of school librarianship. The issues are the same, but the formats, the situations, and the contexts have grown” (qtd. in Adams, 41).

During Banned Books Week, every school librarian has the opportunity to involve students, colleagues, administrators, and families in projects related to the Freedom to Read (http://ftrf.org).

Celia Muniz is the library media specialist at Harlingen High School in Harlingen, Texas. She created a flyer to spotlight her school’s week-long observance of Banned Books Week.

On Monday the Harlingen Information Literacy Center (ILC) kicked off the school’s observance with a display of books and projects created by English language arts (ELA) teacher Mrs. Huerta’s students. (Ms. Muniz sweetened the deal by giving those who stopped by the library circ desk and joined the fight against censorship a candy treat.)

On Tuesday and Wednesday, Mrs. Huerta’s students and the ILC offered Banned Books Week presentations to other classes on a sign-up basis. Today, on September 29th, Ms. Muniz is taking photos in the ILC of staff and students wearing super hero t-shirts and capes. Finally, on Friday Ms. Muniz is distributing “Defending the Right to Read Banned Books” stickers in the cafeteria during both lunch periods.

Similarly, Erikka Adams, head librarian at the Proctor Academy in Andover, New Hampshire, set out to involve the entire campus in Banned Books Week. She created a school-wide, campus-based banned books scavenger hunt, which she kicked off with a school-wide announcement. She followed up the announcement with details via email.

All of the banned books in the hunt had a sheet inside explaining why they are banned and a QR code to a video talking about banned books in general.  She posted the scavenger hunt clues on the library’s social media accounts; students and faculty had to follow/like/friend to get the clues.

Anyone who finds one of the challenged books, snaps a selfie holding the book, and posts the photo using these hashtags (#bannedbooksweek #proctoracademy #proctorreads) will be invited to the post-banned books book swap and pizza party.  Finally, during a school-wide assembly, some students will share the title of the books they found, why each has been banned or challenged, and how students found that particular copy.

Danielle Lewis, middle school librarian at the United National International School (UNIS) in New York, New York, sent this message to the school learning community: “The right to books, libraries, and information is a human right embedded in the UNIS Mission, the Charter of the United Nations and the 2030 SDGs.  I want to start a conversation that helps middle school students explore how our diverse stories enrich the human community — and why we need to celebrate and protect everyone’s right to read and write.”

In collaboration with advisors and subject area teachers, Ms. Lewis opened a discussion with the entire middle school community.

After students were introduced to the issue of intellectual freedom, they were encouraged to participate in a variety of activities including making a poster, taking a “banned book shelfie,” participating in a virtual read-out, and reading diverse banned books. Ms. Lewis created this presentation to support this call to action.

Involving classroom teachers, staff, and students in these week-long projects is one way for Ms. Muniz and the Harlingen High School ILC, Ms. Adams and the Proctor Academy Library, Ms. Lewis and the UNIS Library to diffuse conversations and learning about censorship and First Amendment rights throughout their school buildings.

Brava to these four leader school librarians. If you have questions about their work, you can contact Celia Muniz (@celiamuniz2), Erikka Adams (@LovetheLovejoy), and Seanean Shanahan (@Librarytalker) using their Twitter handles.

And hurray for all of the school librarians who remain defenders of students’ intellectual freedom.