“Nonfiction should not suggest nonfeeling.
Nonfiction offers us the chance to learn not only about the world and the people in it,
but about ourselves” (Beers and Probst 2017, 49).

This spring graduate students in IS445: Information Books and Resources are exploring nonfiction and informational books and resources in the context of inquiry learning. That said, it is important for all librarians (and other educators and parents) to pay attention to the American Library Association’s Youth Media Awards (YMA), which were announced last Monday, January 27, 2020. The first Sibert Awards were given in 2001.

Robert F. Sibert Award
In the context of our class, the Sibert Medal and Honor Books may be the most notable awards for our reading and discussions. The Robert F. Sibert Informational Book Medal is given annually to “the author(s) and illustrator(s) of the most distinguished informational book published in the United States in English during the preceding year.” Mr. Sibert was the long-time President of Bound to Stay Bound Books. The Association for Library Services to Children (ALSC) administers the award.

Among the 2020 award and honor winners there is a narrative nonfiction story told in verse, two memoirs (one in verse, one a poetry collection), a biography, and what I consider a multigenre text. For me, the Sibert Awards show for how members of this committee have taken up the charge to embrace positive trends in publishing, including increasing diversity in authorship, genre, topics, and themes.

2020 Winner and Honor Books
Fry Bread: A Native American Family Story earned the 2020 Sibert Medal. It was written by Kevin Noble Maillard and illustrated by Juana Martinez-Neal. Maillard, who was born in Oklahoma, is an enrolled citizen of the Seminole Nation; Martinez-Neal was born in Lima, Peru. This concept book is told in verse and shares this American Indian food tradition through the experience of a present-day family. The multiracial illustrations are child-friendly charming and connect the importance of fry bread in native homes and communities. (In Arizona, the Tohono O’odham are makers of the best bread I’ve ever tasted.) The book includes extensive back matter.

There were four Sibert honor books this year.

All in a Drop: How Antony van Leeuwenhoek Discovered an Invisible World was written by Lori Alexander and illustrated by Vivien Mildenberger. (Lori happens to be a colleague and a member of the Society of Children’s Book Authors and Illustrators, Arizona, and a Tucsonan.) This chapter book biography, written for an elementary- and intermediate-level readership, tells the amazing discoveries of van Leeuwenhoek who invented the microscope and is known as the Father of Microbiology. (Note: Search Amazon to hear a recording of a segment of the book.)

This Promise of Change: One Girl’s Story in the Fight for School Equality, written by Jo Ann Allen Boyce and Debbie Levy, is a memoir told in verse. It tells of Ann Boyce’s school desegregation experiences in Tennessee. (I have not yet read this book.) From reading reviews, I believe the power of this book is the primary sources and research used to document Boyce’s experiences as one of the “Clinton 12.” See the National Education Association video published on YouTube.

Ordinary Hazards: A Memoir is a collection of poems written by Nikki Grimes. Grimes is known for her poignant and powerful poetry and this collection is especially moving for a young adult readership. (Full disclosure: I am a long-time Nikki Grimes reader and fan.) I appreciate the way she introduces this collection: “Memoir: a work of imperfect memory in which you meticulously capture all that you can recall, and use informed imagination to fill in what remains.” In Ordinary Hazards, Grimes relates the people, places, and experiences that shaped her growing up to how they have affected her adult life. The storied quality of these poems will capture the hearts and minds of her readers who are living their present circumstances and looking forward to their futures.

Hey, Water! was written and illustrated by Antoinette Portis. In her narrative (multigenre?) nonfiction/informational book, a young girl talks directly to and about water. She plays “hide and seek” as she learns and tells readers about how water is everywhere, changes throughout the seasons, and is an essential part of her body. Young children are fascinated by things they can experience through their senses. They will enjoy the child-friendly (and beautiful figurative) language, written at their level of understanding, with labels and clear illustrations. The book includes diagrams, information on the water cycle, conservation, and experiments using water. For me, the innovation in this book for young children is the combination of narrative and the features of expository texts.

Margaret A. Edwards Award
The Margaret A. Edwards Award is given to the author whose body of work has made a “significant and lasting contribution to young adult literature.” The award was established in 1988 and is administered by the Young Adult Library Services Association, YALSA, and is sponsored by School Library Journal. In addition, the award “recognizes an author’s work in helping adolescents become aware of themselves and addressing questions about their role and importance in relationships, society, and in the world.”

Steve Sheinkin earned the 2020 Edwards Award based on these three titles: Bomb: The Race to Build and Steal the World’s Most Dangerous Weapon, The Port Chicago 50: Disaster, Mutiny, and the Fight for Civil Rights, and The Notorious Benedict Arnold: A True Story of Adventure, Heroism, & Treachery. I have read both Bomb and the Benedict Arnold book and concur that Sheinkin’s research is impeccable and his storytelling is captivating. 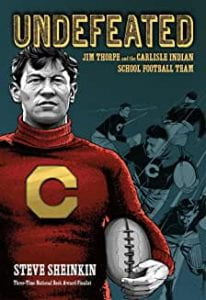 However, from my perspective, another of Sheinkin’s titles could/should have been mentioned, particularly in light of librarians’ efforts to reach young adults who are interested in sports. Undefeated: Jim Thorpe and the Carlisle Indian School Football Team (2017) is, in my opinion, one of Sheinkin’s most compelling narrative nonfiction reads… and I am not a football fan.

I am, however, a student of American Indian peoples and their history, and this book is an astounding true story of the impact Thorpe and his teammates made on college football. With the Super Bowl having been played yesterday, I am wondering how many fans realize that college football spawned professional ball and that the Carlisle Indian School players arguably made the greatest impact on this sport.

The other significance of Sheinkin’s award is that from my reading of past Edwards Award winners, he and Jim Murphy, who earned the award in 2010, are the only recipients in the history of this award who write nonfiction/informational books for young adults.

I wholeheartedly agree with Kylene Beers and Robert Probst: “Nonfiction should not suggest nonfeeling. Nonfiction offers us the chance to learn not only about the world and the people in it, but about ourselves” (2017, 49).