This month the BACC cobloggers will share information related to the Treasure Mountain Research Retreat #22: “Start a Revolution in the Learning Commons” and the American Association of School Librarians’ National Conference and Exhibition: “Experience, Education, Evolution.” Both events will be held this week in Columbus, Ohio. 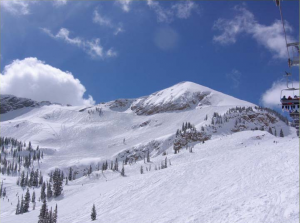 The Treasure Mountain (TM) Research Retreat is a gathering of school library researchers and practitioners. The first TM was held in 1989 In Park City, UT at the base of Treasure Mountain in conjunction with the AASL National Conference in Salt Lake City (hence the photograph). The group has met since then, usually in conjunction with AASL national conferences. This week’s meeting is the 22nd TM and is being organized by Drs. David Loertscher and Blanche Woolls. You can read more about the meeting from the TM history tab.

Researchers submit papers to be included in the retreat proceedings, serve on panels and discuss their work in table groups. This year, I am presenting a paper called “The Learning Commons: A Strategic Opportunity for School Librarians.” In the paper, I discuss literature and research related to three trends in school librarianship: the learning commons (LM) model, evidence-based practice (EBP), and coteaching. To support this work, I have created an infographic to show how these three can lead to school librarian leadership.

The TM experience often involves collecting data and conducting real-time research. Drs. David Loertscher, Ross Todd, and Joyce Valenza are asking practicing school librarians who have established a LC model in the school library to respond to a brief questionnaire.

The 22nd TM will be the last one that Dr. Loertscher will sponsor. I suspect this important activity for school librarian researchers, educators, and practitioners will continue in another form in the future.

On Thursday, I will share a bit about the preconference workshop I am facilitating at the AASL conference.

BACC readers can learn more about the Learning Commons model by following #LearningCommons on Twitter and the AASL Conference at #aasl15.