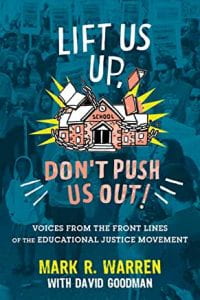 This week, August 3rd – 7th, I’m participating in the Racial Justice Challenge. Perhaps you are participating too. Each day, for five days, I’ll receive an email with several tasks designed to learn, listen, share, and take action regarding race, racism, and antiracism. Along with other participants, I will explore how to be antiracist (versus “not racist”), move beyond a single story, examine issues of race in the media, and design a personalized racial justice plan.

I will be participating with a preK-12 educator lens and with an eye for how school librarians can be instrumental in antiracist activism. I look forward to reporting my learning in next week’s blog post.

As part of my preparation, I read essays from Lift Us Up, Don’t Push Us Out! Voices from the Front Lines of the Educational Justice Movement by Mark R. Warren (2018). I was unaware of the book when it was published and am so grateful to the contributors for sharing their experiences in striving for and achieving social justice in schools. You can also access an interview related to #LiftUsUpDontPushUsOut.

The book is divided into four sections. While all of the essays are worth reading, I’m sharing my response to four focused on race and ethnicity.

Part One: Building the Power for Change: Parent, Youth, and Community Organizers
“Speaking Up and Walking Out: Boston Students Fight for Education Justice” was written by Carlos Rojas and Glorya Wornum. Each author tells their first-person story about why and how they became involved with Youth on Board (YoB). Glorya shares how, beginning in 8th-grade, she experienced discrimination and suspensions as a Black student who asked too many questions and looked for family among angry peers. She found “positive energy among angry people” (21) through YoB. She learned how to express strong emotions in a productive way, ask questions respectfully, and lead change. Carlos shares how his life changed when he could say aloud: “I’m undocumented and unafraid.”

Both of these young people were leaders on the “Code of Conduct Advisory Committee” that help change punitive disciplinary practices to restorative justice interventions in their school, their district, and later via legislation that impacts students throughout Massachusetts. They were also involved in creating an app to help students, educators, and parents know their rights and responsibilities. They helped organize student walkouts when the Boston mayor threatened to cut school budgets that resulted in funds being restored.

Carlos and Glorya’s message: Put young people’s experiences, voices, and solutions at the center of educational social justice. While reading their essay, I made strong connections with the young activist life of Representative John Lewis. When educators make a space for student organizing, students can experience agency and advocacy that can carry them and our society forward throughout their lives.

Part Two – Broadening the Movement: Building Alliances for Systemic Change
Last month, I participated in a webinar with Diane Ravitch and Jitu Brown. (It was through that webinar that I learned of this book.) Jitu contributes an essay called “#FightforDyett: Fighting Back Against School Closings and the Journey for Justice.” He tells how school closures in Black and Brown neighborhoods increase class sizes, undermine community cohesion, and price people out of homes with the resulting gentrification. He shares how their advocacy coalition proved in court that closing schools attended by students of color is an act of racial discrimination when small schools in White neighborhoods are allowed to remain intact.

In his essay, Jitu shares how students and multiracial community organizations came together to fight the closure of Dyett High School on Chicago’s southside, a predominantly Black neighborhood. He tells how the community, led by two high school students, engaged in civil disobedience and captured the attention of the national media after the mayor announced the school would reopen as a charter school. This was unacceptable to the community; they presented their vision for a technology and arts curricular focus for their school. As the result of a hunger strike, the community succeeded in keeping the school open and are still working to see their vision come to full fruition.

Jitu’s story and work connect strongly to the challenges we face where I live in Arizona. The proliferation of charter schools has negatively impacted Tucson Unified School District (TUSD), our largest local district. Like CPS and TUSD, large urban school districts struggle to serve all students in their immediate neighborhoods when students are recruited to taxpayer-funded charters thereby reducing enrollment and funding in district public schools. Similar to the situation at Dyett, predominantly Latinx families in the Wakefield Middle School service area organized and have succeeded in reopening and revitalizing a school that was shuttered for under enrollment.

Jitu’s Message: Multiracial coalitions must be rooted in the self-determination of people of colore in order to build powerful movements that win for Black people as well as others impacted by injustice.

Part Three – Educators for Justice Movement Building in Schools, School Systems, and Universities
Sally Lee and Elana “E.M.” Eisen-Markowitz contributed the “Teachers Unite! Organizing School Communities for Transformative Justice” essay in this section. Sally is a founding organizer of New York City Public Schools’ Teachers Unite (TU), a teachers’ organization with a “mission to organize democratic school chapters under the principles of equity, voice, diversity, and action, with an eye toward changing society and building a center for radical teacher organizing” (94).

In 2008, TU co-published Teachers Talk: School Culture, Safety, and Human Rights along with the National Economic and Social Rights Initiative. TU also was involved in creating a documentary film and toolkit called Growing Fairness focused on restorative justice and resisting the racist criminalization of students, in particular.

In the essay, Sally and E.M. discuss the critical importance of a “relational approach” to organizing. This quote jumped off the page at me: “in a functioning democracy, we must slowly build consensus among diverse individuals around core values in order to transform culture” (95). This work must be done locally at each school site where all school stakeholders can lead educational justice guided by the principles of democracy and equity.

Sally and E.M.’s message: “I have seen and felt how schools can be sites of trauma and oppression as well as meaningful growth and change” (97). Let’s join them in working together to advocate and enact growth and change.

Part Four – Intersectional Organizing: Linking Social Movements to Educational Justice
In “The Same Struggle: Immigrant Rights and Educational Justice,” activist researcher and educator José Calderón begins his piece by sharing how, as a new college graduate, he joined the farmworkers movement after hearing César Chávez speak. After returning to his hometown in Colorado, José shares how he supported parents of English language learner immigrant students in marching for and succeeding in instituting bilingual education in the county. He came to understand the connection between immigrant rights and educational justice.

After earning his PhD., José joined with others in fighting English-only education as both a researcher and activist. He has also joined with various coalitions and conducted research related to voting rights, street violence, and advancing community schools. He makes a strong case for the positive outcomes of his work as an activist scholar.

José’s message: By following César Chávez’s principle of living one’s life in the service of others and forming mutually beneficial partnerships, we can look back on our lives and say that we have made meaningful contributions to improving the world.

Transforming School Culture
While I wish I had read these essays in 2018 when the book was published, I was inspired by reading them now in this time of civil unrest and conscientization with the potential of educational transformation. This reading also came to me as I work with seventeen contributors to finalize our book manuscript related to core values in school librarianship–absolutely perfect timing.

Thank you to all of the Lift Us Up, Don’t Push Us Out! contributors.

Work Cited
Warren, Mark R. 2018. Lift Us Up, Don’t Push Us Out! Voices from the Front Lines of the Educational Justice Movement. Boston: Beacon Press.