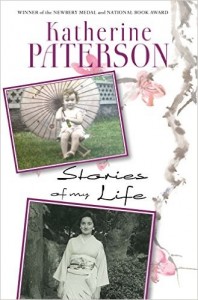 Katherine Paterson has been a long-time favorite author of many ‘tween and young adult fiction readers. In her latest book, Stories of My Life (2014), Ms. Paterson shares her own life story and shares how she has woven the people, places, and events in her life into her novels. At the American Library Association (ALA) Conference in San Francisco in June, I picked up a “Special Librarian Preview.”

In the book, Katherine answers three most frequently asked questions of authors: How did you become a writer? Where do you get your ideas? How does it feel to be famous? When educators guide student inquiry centered on author studies, these are some of the first questions youth want to investigate. Inquirers will be delighted to find her answers and may be surprised that even though a college professor encouraged her to write, Katherine, who considered herself a mediocre writer, had no intention of pursuing writing as a career. Later, she learned that “if you don’t dare to be a mediocre writer, you’ll never be a writer at all.”

Katherine Paterson’s book Jacob Have I Loved (1980) was the first of hers I read and remains an all-time favorite. To illustrate how Katherine’s own mother influenced the character of Susan Bradshaw, Louise and Caroline’s mother in that book, Katherine tells about her own mother’s reaction when she broke her mother’s precious antique Chinese tea service: “Are you all right, darling?” Katherine claims she could not have created a character like Susan Bradshaw had she not had the example of her own mother. 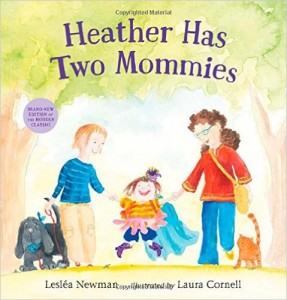 At ALA, I stood in line to ask Lesléa Newman to autograph a copy of her just released edition of Heather Has Two Mommies (2015). This ground-breaking story, originally published in 1989, about a child with two mothers has weathered many storms—from censorship challenges and inflammatory reviews—to acclaim by being read into the Congressional Record and parodied by Jon Stewart. (See the downloadable author’s note available from the Candlewick Web site.)

With the June, 2015, Supreme Court ruling in favor of the freedom to marry for same sex couples nationwide, this new edition of Heather Has Two Mommies will speak to a new generation with bright new illustrations by Laura Cornell. Librarians and teachers who are committed to children’s access to literature with diverse characters will want to be sure to add this seminal story, this new publication, to their collections.

Stories of My Life cover image courtesy of Dial Books