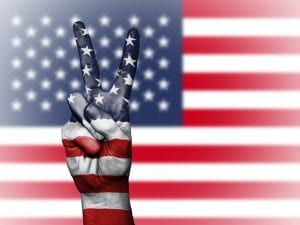 Rather than share a post focused on school librarianship on this Memorial Day 2020, I am asking you to read “The First Decoration Day,” an article written by American history professor Dr. David W. Blight that is accessible on the Zinn Education Project.

According to Blight’s research, the first large-scale public event to honor the 606,000 soldiers who died in the Civil War was held on May 1, 1865 in South Carolina, where the war had begun. In Charleston, 10,000 people, most of them former slaves, held a parade on a racetrack, owned by former slaveholders. The parade began with 3,000 thousand Black schoolchildren carrying arm loads of roses and singing “John Brown’s Body.” They were followed by several hundred Black women carrying baskets of flowers, wreaths and crosses. Then came Black men marching in cadence, followed by contingents of Union infantry and other Black and White citizens (Blight).

As Blight notes, “Pride of place as the first large scale ritual of Decoration Day, therefore, goes to African Americans in Charleston. By their labor, their words, their songs, and their solemn parade of flowers and marching feet on their former owners’ race course, they created for themselves, and for us, the Independence Day of the Second American Revolution.”

I have often thought of national holidays as essential learning and necessary teaching if we are to preserve our democracy. For me, this article is a poignant reminder that all of us living in the U.S. today should make a heartfelt effort to know our shared history.

Memorial Day is a time to rededicate ourselves to greater respect, empathy, and commitment to one another—working together for peace and understanding at home and around the globe.