While we have long known that school district budget priorities are the primary deciding factor as to whether or not a school district employs school librarians, we might have also assumed that the funds available to school districts based on per student spending would also play a large role.

So, one of the surprising (to me) findings of the School Librarian Investigation—Decline or Evolution? (SLIDE) Research Project is that per student spending is not a significant factor in terms of school librarian staffing. 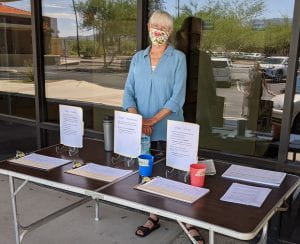 Funding Counts
That said, funding MUST play a role in Arizona: 48th among the 50 states for K-12 per student spending and 47th in educator salaries. Arizona is also 46th in the nation for the number of state-certified school librarians and at least in Tucson Unified School District (TUSD), decision-makers cite the cost of staffing state-certified school librarian positions as the barrier to equitable access.

The Legislature passed and on June 30, 2021, the Governor signed three bills that will further underfund public education. This is a crisis.

It behooves us as school librarians and people who care about the quality of education for Arizona students to help put three measures on the 2022 ballot to rescind these tax cuts. We must not allow our elected “representatives” to overturn the will of the voters to decrease rather than increase funding for our public schools.

The following are summaries of three referenda currently circulating in Arizona. Signatures must be collected and submitted by September 28, 2021.

Rescind SB 1828: FLAT TAX
This bill changed the Arizona income tax structure. Before SB 1828, we had a graduated tax with the wealthiest Arizonans paying 4.5%. With this legislation, 2.5% is the maximum flat tax liability and all Arizonans will pay at that rate, disproportionately benefiting the wealthy.

Consequence: The reductions in state coffers affect all ALL types of services, including libraries, K-12 education, police, fire, and more.

Crisis: In Arizona, overturning tax legislation requires a 2/3 majority of the Legislature, which in effect means these cuts will be permanent if not stopped by the voters NOW.

Consequence: This bill reduces K-12 funding by over $250M per year and will impact other services as well. It undermines voter approved Proposition 208, which increased tax collection for public school funding. If high-income individuals pay the 3.5% Prop. 208 surcharge, they would only pay 1% of income tax while others would pay 2.5%. It benefits wealthy taxpayers only.

Rescind SB 1783: Prop 208 Attack
This bill allows any high-earning individual to file as a “small business” in order to reduce their tax liability. It reduces Prop. 208 funds by $300Million.

Consequence: This bill undermines the will of voters who passed Prop. 208 and renders this voter initiative ineffective.

Bucking the Data
As I noted in last week’s post “SLIDE Project Data and Tools: Focus on Arizona Results,” my current advocacy work is in TUSD. I live within the district’s borders and served as an elementary and a high school librarian in TUSD for 12 years in the 1990s and early 2000s.

Today, with state-certified librarians serving only 13 of TUSD’s 86 schools, restoring school librarian positions is first and foremost about equity.

Unfortunately, the SLIDE data is not on the side of students achieving equal access to a high-quality education in Arizona and TUSD.

“This study also discovered that, in most cases, once librarian positions were eliminated, they were not reinstated. By 2015-16, almost 3 out of 10 local districts had eliminated all school librarians, and, by 2018-19, 9 out of 10 of those districts had not reinstated them. A study of the almost 10% of districts that lost, but later reinstated, librarians could be informative regarding factors contributing to such reinstatements” (Lance and Kachel 2021, 85).

Meeting the Needs
All 42,000+ TUSD students, educators, and families deserve access to high-quality school library programs led by a state-certified school librarians. TUSD can be THE district in the state and in the country that bucks the data and shows literacy learning is a high priority in a district with a majority of Latinx students and students who qualify for free and reduced meals and with a large number of students who are English language learners.

Let’s show all our students and their families that decision-makers, parents/grandparents, and voters are committed to giving students the tools they need to succeed. Let’s show that we understand that reading proficiency and literacy learning are the foundation on which all academic subjects and life pursuits depend.

Let’s work together to rescind budget cuts for the wealthy, enact the will of the voters who passed Proposition 208 to increase public education funding, and restore school librarian positions in TUSD and throughout Arizona.