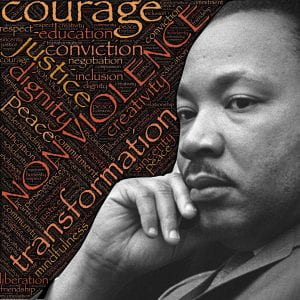 We honor the lasting legacy of the Reverend Dr. Martin Luther King, Jr. on the third Monday in January. This national holiday is particularly timely in 2021 when recent civil unrest has ripped the political and social fabric of our nation. We are now at a decision point for re-weaving the tear and moving forward together toward a more just future for all Americans.

Were he alive today, I believe Dr. King would demand that we take this opportunity to affect positive and enduring political and societal change. To that end, I join with many of our fellow citizens who call for a time of awakening and reckoning with a history of injustice in order to co-create a space for healing, envisioning, and taking action for justice.

“A democracy must be reborn anew every generation, and education is its midwife.” – John Dewey

And as John Dewey noted, education is necessary to ensure the future of a democracy. If I were in charge of the world, which I am clearly not, students would be in school today and adults would be gathered in library and community spaces to engage in civic and civil dialogue around issues of democracy and justice.

Last week, I spotlighted the upcoming Black Lives Matter at School Week of Action, February 1-5. This week, I want to share a few more resources that have awakened me in the past week.

In the conversation, Dr. Sealey-Ruiz made a strong case for why racial literacy must be taught in schools. Educators can guide students in constructive conversations around race and racism and how it impacts people’s lives. Race is a social construction that can and must be understood before it can be addressed. Together, we can probe systems to dismantle systems of oppression, develop our understandings as active allies, and co-create decolonizing spaces in our schools. This seems to me to be an action Dr. King would wholeheartedly support.

Civil Rights Movement: Primary Sources and Graphic Novels
The January/February 2021 issue of Knowledge Quest includes an article by Dr. Karen Gavigan: “Journey for Justice: Helping Teens Visualize the Civil Rights Movement through Primary Sources and Graphic Novels.” In the article, Dr. Gavigan makes connections between the primary sources offered by the Library of Congress and three graphic novels: The Life of Frederick Douglass: A Graphic Narrative of a Slave’s Journey from Bondage to Freedom by David F. Walker, Damon Smyth, and Marissa Louise (Ten Speed 2018), March: Book One by John Lewis and Andrew Aydin (Top Shelf Productions 2013), and Showtime at the Apollo by Ted Fox and James Otis Smith (Abrams ComicArts 2019).

Social studies and history curricula charge students with seeking information from primary source documents. These documents engage students in accessing historically situated perspectives on past (and current) events. When school librarians and classroom teachers curate resources for students to explore, they can help young people increase their comprehension of primary sources by inviting students to read graphic novels on the topics and themes related to their study. These student-friendly texts can help deepen students’ discussions, interpretations, and meaning-making regarding historical as well as current events.

The Rebellious Life of Mrs. Rosa Parks
Author Jeanne Theoharis is a political science professor at Brooklyn College of City University of New York. This past week, I read selections from her full-length adult edition of The Rebellious Life of Mrs. Rosa Parks (Beacon Press 2013). While reading, I was once again struck by the discrepancies between the way history happens and how events are shaped and retold, particularly in resources created for youth.

Similar to every school child in the U.S., I met Rosa Parks as the quiet seamstress with aching feet who in 1955 refused to give up her seat in the “colored section” so a White person could sit down. I remember my surprise as an adult learning that Mrs. Parks had a lifelong history of civil rights activism and had, in fact, dedicated sixty years to seeking freedom and justice for herself and others. That fact was never part of the narrative I learned in school.

When reading Dr. Theoharis’ book, I finally (!) made a connection to my own K-12 education. Mrs. Parks had moved from Montgomery to Detroit in 1961 and learned that Blacks experienced segregation and discrimination as virulent in the North as she had known in the South. In 1964, Mrs. Parks joined Detroit-area Congressional candidate John Conyer’s “Jobs, Justice, Peace” campaign. Mrs. Parks convinced Dr. King to come to Detroit to speak and endorse Conyer’s campaign. Conyer’s was elected and served in Congress from 1965 – 2017. (He was the longest serving Black representative and also one of thirteen co-founders of the Congressional Black Caucus.)

My family moved to the Detroit-area in 1964. I attended high school in a Detroit suburb at the same time Mrs. Parks was an activist working for freedom in the city. What struck me while reading about Rosa Parks’ work in Detroit is that I cannot remember a single high school history teacher (1965-1968) ever suggesting that my all-White classmates and I make the connection between the Rosa Parks we learned about in elementary school with the courageous woman who was dedicating her life, at that very time, to social justice work in our own city.

I look forward to reading the middle grade version of The Rebellious Life of Mrs. Rosa Parks co-authored by Brandy Colbert and Dr. Theoharis that is now available from Beacon Press (2021). The book is part of a ReVisioning History for Young People series.

Civic Education
In the past year, many educators across the U.S. have been considering and reconsidering how we teach civic education in our K-12 schools, colleges, and universities. It is clear that youth (and adults) need:

For the sake of our students and our nation and to honor of Dr. King, educators, let’s be the midwives who attend the birth – rebirth – of democracy in this generation and the next.