In the month of August, I am blogging on WOW Currents. You can access today’s post “Guided Inquiry Design: Open and Immerse Phases.”

Each of the four August School Librarian Leadership posts are focused on professional books related to the posts on WOW Currents.

There is at least one common value that educators share that leads us to our career choice. We care deeply about the lives, learning, and well-being of other people’s children. Unfortunately, in my opinion, that is not the case for far too many educational policymakers and adults living in the United States today.

In the first online class session for IS445: Information Books and Resources for Youth, I read aloud For Every Child: The UN Convention on the Rights of the Child in Words and Pictures by Caroline Castle, illustrated by various notable children’s picture book illustrators (2000). This book beautifully and powerfully conveys the articles of the Convention. After reading, I cited information about the number of signers on the UN Convention and the fact that the United States has not signed. IS445 graduate students were surprised. I invited them to dig deeper to find out why. For me, the answer to that question is “childism.” 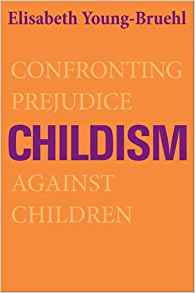 WOW Book Study
In our first or second meeting, a colleague in our Worlds of Words professional book study made connections to “childism.” (Our book study focused on Suzanne Choo’s book Reading the World, the Globe, and the Cosmos: Approaches to Teaching Literature for the Twenty-first Century.) “Childism” was a term with which I was previously unfamiliar. Our colleague recommended reading a book by Elisabeth Young-Bruehl: Childism: Confronting Prejudice Against Children (2012).

“Childism” can be defined as prejudice against children and teens based on their age and vulnerability. Elisabeth Young-Bruehl goes even further. She states that childism is “prejudice against children on the ground of a belief that they are property [of their parents and society] and can (or even should) be controlled, enslaved, or removed to serve adult needs” (37). Young-Bruehl describes how adults are failing our collective responsibility to young people by not to recognizing “childism” along with racism, sexism, ageism, and other prejudices.

“Childism could help identify as related issues child imprisonment, child exploitation and abuse, substandard schooling, high infant mortality rates, fetal alcohol syndrome, the reckless prescription of antipsychotic drugs to children, child pornography, and all other behaviors or policies not in the best interest of children” (7). (The author also makes a connection between childism and the fiscally irresponsible behavior of the U.S. Congress that mortgages our children’s futures with astronomical indebtedness.)

Young-Bruehl believes that when adults take time and learn to see the world from the perspective of a child, we can help make the world a safer, saner, happier place for all our children–our future. In her psychotherapy practice, Young-Bruehl listens to adults who retell their childhood experiences. From their experiences, she has heard shocking evidence to support statistics that show the U.S. has the highest rates of child abuse among first-world nations. The U.S. also incarcerates more children than any other country in the world; many of these children are themselves victims of abuse and neglect. Reading this book influenced the inquiry question that I used to model the Guided Inquiry Design Framework (Kuhlthau, Maniotes, and Caspari 2012) for our class.

Inquiry Question
Hearing authors Susan Kuklin and Andrea Warren speak at the Tucson Festival of Books (TFOB) in March, 2019, further ignited my passion for this topic. Kuklin’s book We Are Here to Stay: Voices of Undocumented Young Adults (2019) and Warren’s book Enemy Child: The Story of Norman Mineta, a Boy Imprisoned in a Japanese American Internment Camp During World War II (2019) pushed me to think even more critically about this question.

Before reading Childism or attending the TFOB, I had a compelling interest in current issues surrounding prejudice and discrimination, specifically against immigrants and refugees. I live in Tucson, Arizona, sixty miles from the U.S./Mexico border. People crossing the southern border seeking work and a better life for themselves and their families has long been an everyday, politically charged issue in our community. This issue is currently heightened by the city’s humanitarian decision to provide safe havens for asylum-seekers.

All three combined (Childism, young adult literature, and our Tucson community’s activism) resulted in this overarching (essential) question for an Explore pathfinder of nonfiction books and information resources:

Is it important that students interact with global nonfiction and informational books and resources when they investigate prejudice and discrimination as it impacts the lives of young people today?

Childism
Reading Childism convinced me this was the inquiry question I wanted us to pursue as an example for the class. As noted by author Elisabeth Young-Bruehl, a “prejudice” is a “belief system” rather than a “knowledge system.” It is based on stereotypes that are applied generally to all members of a population. Many adults (some education policymakers included) use a child’s natural dependency as a reason to deny them rights, to undermine their agency and capacity for choice and voice as well as critical thinking.

Young-Bruehl refers to prejudices as “fantasies” that can operate at a conscious or unconscious level that lead to actions that harm others. This means to me that adults as well as children can and should be educated to recognize childism as a prejudice to be uncovered and addressed. Since our IS445 course focused on books and resources for youth, I set out to help graduate students see the world of ideas and information from a young person’s perspective—to see youth as agents in their own learning who should have the authority to make choices, express their voices, and apply critical thinking to issues that affect their lives and the lives of their global peers.

In Childism, the author shares information from The Irreducible Needs of Children: What Every Child Must Have in Order to Grow, Learn, and Flourish (2000), a book written by T. Berry Brazelton and Stanley I. Greenspan, physicians who are staunch advocates for children. Young-Bruehl shares the seven needs and notes that the seventh puts the other six in context: “Throughout the world future generations of children and families will be much more interrelated. In order to protect the future of one child, we must protect it for all” (cited in Young-Bruehl 2012, 279).

If you read only the introduction, first chapter “Anatomy of a Prejudice,” and the last “Education and the End of Childism,” you may, like me, begin to notice the consequences of childism in many aspects of education policy and other areas of U.S. society. This book made an enormous impact on my thinking and on my planning for IS445: Information Books and Resources for Youth.

Like Young-Bruehl, I believe that all children have the right to a healthy childhood and the right to be educated responsible world citizens. Do you?

Side note: If you are interested in reading about why the U.S. is the only country that has not ratified the UN Convention on the Rights of the Child, please read information published on the ACLU website on the twenty-fifth anniversary of the Convention.