At the June, 2019 American Library Association (ALA) Annual Conference in Washington, D.C., I attended the Freedom to Read Foundation’s (FTRF) 50th Anniversary Celebration. I wrote about the celebration on my blog on July 1, 2019. The FTRF is a non-profit legal and educational organization affiliated with ALA. Supporters helped crowdfund the event by purchasing tickets and the FTRF’s book. Reading Dangerously: The Freedom to Read Foundation Marks 50 Years (2019) in advance of the event. I jumped at the chance and am so happy I did.  This post is about the book and the work of the FTRF.

I can still remember my excitement during my very first class in my first course as a library science graduate student. The course was “Foundations” and the First Amendment and the Library Bill of Rights were the topics for the opening class session. I remember the satisfaction I felt knowing that activism would be part of my everyday work as a librarian. I also remember telling my husband and daughter that night at the dinner table how deeply pleased I was to learn that librarianship was political. 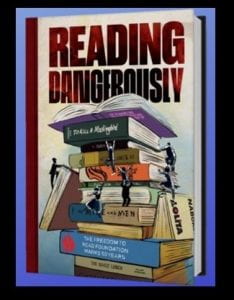 Reading Dangerously opens with an introduction by Neil Gaiman. As Gaiman writes, the First Amendment means that we will be called upon to “defend the indefensible. That means you are going to be defending the right of people to read, or to write, or to say, what you don’t say or like or want said” (v). But as he also notes that willingness to defend free speech means that your own speech commands defending, too. The next section of the book is a powerful statement by the FTRF’s founder Judith Krug: “We were trying to develop a total program in defense and support of the First Amendment, and that’s basically what we’ve done… The Freedom to Read Foundation is the last step…. When all else fails, then we can go to court.”

The Foundation has three primary activities:

And go to court they have… In collaboration with the American Civil Liberties Union and other organizations, the FTRF has supported plaintiffs and defendants across the U.S. as they seek legal remedies for upholding the First Amendment. The book includes a timeline and brief summaries of selected cases held over the past fifty years. With my lens as a librarian focused on young people’s rights, these are some of the highlights from that timeline. (Note: There are several interpretations of the Library Bill of Rights that relate to the rights of youth.)

Board of Education, Island Trees Union Free School District V. Pico (1978): In this case, a student challenged the school board for removing nine books from school libraries, including Soul on Ice and Black Boy. This case went all the way to the Supreme Court where the student prevailed. (*This one was on the test in the Foundations course!)

Selected other challenges to children’s and young adult literature included Sund V. City of Wichita Falls, Texas (2000) resulted in returning Heather Has Two Mommies and Daddy’s Roommate to library shelves. Counts V. Cedarville (2003) required the school board to return the Harry Potter books to school library shelves. The FTRF has provided many grants to librarians who are fighting censorship; fortunately, in most instances, books are returned to library shelves and cases do not end up in court.

Other cases that jumped off the page for me involved a grant to fund the legal defense “Pentagon Papers” authors Daniel Ellsberg and Anthony J. Russo, Jr. (1973). U.S. Department of Justice V. American Library Association (1997): ALA prevailed in a case that struck down the Communications Decency Act of 1996 that sought to limit First Amendment rights on the internet. The U.S. government and ALA went to court again (2001) regarding the Children’s Internet Protection Act (CIPA) that required public libraries to employ blocking software that both over-blocked and under-blocked websites deemed harmful to children. The ruling gave libraries leeway in finding less restrictive ways to protect children’s online safety.

But the cases closest to home made me especially proud to be part of this profession and a supporter of the FTRF. After a five-year battle, the FTRF and the Tucson Unified School District Mexican American Studies program prevailed (2018) over the Arizona Superintendent of Instruction and other state officials. This case successfully challenged an Arizona statute that “prohibited the use of class materials or books that encourage the overthrow of the government,” or “promote resentment toward a race, or class of people,” and are “designed primarily for pupils of a particular ethnic group,” and “advocate ethnic solidarity instead of the treatment of people as individuals” (53-54). This academically focused program had successfully motivated at-risk students and kept them in school. Although the legal battle took its toll, the district’s (renamed) Ethnic Studies Program was able put the contested materials back on the shelves in classrooms and school libraries.

The FTRF supports Banned Books Week through grants to libraries and others who sponsor public events and discussions centered on intellectual freedom. The book includes excerpts from nine of the most frequently challenged books between 2013 and 2017; seven of which were written for children and young adults.

The final section of Reading Dangerously was contributed by James LaRue, Director of ALA’s Office of Intellectual Freedom. His chapter should be required reading for every librarian and library science student in the U.S. Many of the intellectual freedom challenges that have faced our patrons, our librarian colleagues, our communities, and our country in the last fifty years continue today. It is imperative that the FTRF and librarians across the country remain vigilant and true to our core values. As LaRue writes: “FTRF is now, and should continue to be, a principled and focused voice for the rights of all to explore the ideas within and around us” (179)—emphasis added.

Thank you, Freedom to Read Foundation. When we go about our daily practice of librarianship, we are true to our values and supported by the FTRF when we keep First Amendment rights and intellectual freedom foremost in our minds as we: