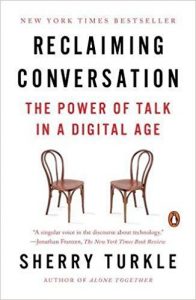 While authoring my forthcoming book, I have read many professional books. This is the sixth in a series of professional book reviews–possible titles for your summer reading. The reviews are in no particular order. I published Part 1 of Sherry Turkle’s book Reclaiming Conversation: The Power of Talk in the Digital Age last week.

In relationship to children, Turkle writes this: “If children don’t learn how to listen, to stand up for themselves and negotiate with others in classrooms or at family dinner, when will they learn the give-and take that is necessary for good relationships or, for that matter, for the debate of citizens in a democracy?” (14).

“In these new silences at meals and at playtime, caretakers are not modeling the skills of relationship, which are the same as the skills for conversation. These are above all empathic skills: You attend to the feelings of others; you signal that you will try to understand them” (27).

Response: When I lived in Denton, Texas, I regularly walked in a park where I would see children playing. I often observed their parents and caregivers using their phones (instead of watching their kids or playing with them). Recently, my husband and I were having dinner in a restaurant where at the next table each member of a family of four was occupied with an individual device before, during, and after their meal. (The children were about six and nine.)

I have been in meetings where people are using their phones and may or may not be listening to the conversation. Or they may be using their laptops and checking their email—sometimes under the guise of making meeting notes. It may or may not be intentional rudeness but most meeting facilitators and people who speak for items on the agenda feel disrespected by not having their colleagues’ full attention.

Turkle makes a strong case for conversation as the primary way we build empathy for others. As a book person, I believe that reading about other people’s lives has been a large part of my empathy building. Still, in face-to-face conversations with relatives and friends looking into their eyes, reading their faces and body language, that’s when I really understand what they are feeling. The same can be said for students in our classes and the colleagues with whom we work.

Response: I have felt that disrespect. For me, it leads to a lack of trust in the person who cannot be “in” the conversation. I also believe this is one of the challenges in teaching 100% online. Students want to feel their instructors understand them, especially when they are having a problem. However, many would rather text or email than talk on the phone. Emotions are simply not communicated as clearly and misunderstandings can and do result.

Turkle notes that some young people avoid difficult conversations at all costs. They will not even have phone conversations but would rather text where they can be assured of time to clearly organize their thoughts, edit, and avoid “too much emotional stuff.”

Turkle says that in face-to-face conversations it is often when “we hesitate, or stutter, or fall silent, that we reveal ourselves most to each other” (23). Slowing down the conversation in this way makes some people feel anxious, or bored. Some feel so uncomfortable they will turn to their phones and check out of the conversation.

Response: Since reading this book, I have become more sensitized to my own feelings during the “silences” and “pauses” in conversations and during transitions from one activity to another. I have found myself reaching for my phone while waiting at the doctor’s office or standing in line at the market. I am catching myself more often and making a conscious decision about whether or not I want/need to consult my phone. Several times when I have opted out of connecting via tech, I have had an epiphany about an idea that’s be stuck in my head. I have even had pleasant conversations with the strangers sitting next to me or standing in line behind me.

Turkle writes: “Until a machine replaces the man (who scans your groceries), surely he summons in us the recognition and respect you how a person. Sharing a few words at the checkout may make this man feel that in his job, this job that could be done by a machine, he is still seen as a human being” (346).

Response: Turkle has given me another reason not to use the self-checkout machines. I have avoided them because they represent the loss of jobs. I will continue to avoid them and make an effort to engage in even a brief conversation with the person doing this work.

Turkle claims her argument is not anti-technology. Rather it is pro-conversation. She invites us on a journey “to better understand what conversation accomplishes and how technology can get in its way” (25). She charges us to become different kinds of consumers of technology and compares this to the ways many people have become more discerning and knowledgeable consumers of food.

In terms of understanding, Turkle posits three wishes our mobile devices grant to us:
1. “That we will always be heard;
2. That we can put our attention wherever we want it to be, and;
3. That we never have to be alone” (26).

Response: Questions we might ask ourselves related to these three wishes:
1. Who do we want to “hear” us? And why?
2. What amount of control can we give up in order to put our attention on things not of our choosing that need our attention? Can we do that even when it’s “inconvenient”?
3. What could we gain by spending time alone with our thoughts—in daydreaming or self-reflection?

As Turkle says people are resilient. We can change. We can pay more attention, listen more carefully, and respond to one another with empathy. We can do that by reclaiming the value of talking with one another face to face. We can do that by consciously deciding when to pay attention to people and when to pay attention to our machines. And we can model and practice this with youth, colleagues, friends, and family.

Turkle ends the book this way: “This is our nick of time and our line to tow; to acknowledge the unintended consequences of technology to which we are vulnerable, to respect the resilience that has always been ours. We have time to make the corrections. And to remember who we are—creatures of history, of deep psychology, of complex relationships, of conversations artless, risky, and face-to-face” (362).

Is summertime a time to start reclaiming conversation? It is for me. I hope it is for you, too.