While authoring my forthcoming book, I have read many professional books. This is the second in a series of professional book reviews–possible titles for your summer reading. The reviews are in no particular order. 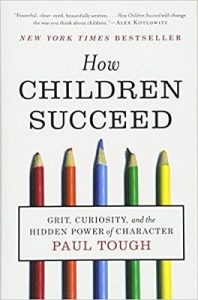 Helping children and teens develop dispositions is one of the essential aspects of preparing future-ready students for schooling and life. In my research on this topic, I was happy to find Paul Tough’s book How Children Succeed: Grit, Curiosity, and the Hidden Power of Character. (I have not yet read his more recent book Helping Children Succeed: What Works and Why.)

These are some of the “cognitive hypothesis” examples Tough gives that may speak to BACC blog readers:
1. The fewer words a child hears and speaks before entering school the more likely she is to struggle in schooling.
2. Fewer books in the home puts a child at risk in reading proficiency.
3. More math homework means higher math scores.

These examples (two near and dear to my heart) suggests a linear view of cognitive development.

Tough’s “character hypothesis” adds a different perspective. “What matters most in a child’s development is not how much information we can stuff into her brain in the first few years. What matters, instead, is whether we are able to help her develop a very different set of qualities, a list that includes persistence, self-control, curiosity, conscientiousness, grit, and self-confidence. Economists refer to these as noncognitive skills, psychologists call them personality traits, and the rest of us sometimes think of them as character” (xv). In the world of school librarianship, we refer to these noncognitive skills, personality traits, or character traits as “dispositions.”

While I disagree with Tough’s use of the word “stuffing” here, I read on and found myself developing a hybrid view of these two apparently opposing hypotheses.

The “character hypothesis” explains a number of children I have met. In over twenty-five years of teaching, I have met and admired those “outlier” kids who seemed to have missed out on literacy enriched upbringings yet have excelled in every school-based measure of achievement. I have also met and wondered about very privileged children who seemed to have had every advantage yet were unable to persevere at tasks (even of their own choosing) and lacked grit. (Tough uses Angela Duckworth’s definition of grit: “self-discipline wedded to a dedicated pursuit of a goal.”)

I agree with Tough that there are many other ways to develop “executive functions” besides growing up with the advantages afforded (most? some?) privileged children. These higher-order mental abilities, such as the ability to deal with confusing and unpredictable situations, can be learned in many ways and at many points during a person’s life. “Executive functions and the ability to handle stress and manage strong emotions can be improved, sometimes dramatically, well into adolescence and even adulthood” (48).

I totally agree with Tough that: “Parents and other caregivers who are able to form close, nurturing bonds with their children can foster resilience in them that protects them from many of the worst effects of a harsh early environment” (28). And in my experience (and in the views of other researchers) when parents and other caregivers talk to and dialogue with their young children and enfold them in their arms while reading to them, children are indeed building the bonds that help children develop resilience. (Hence my objection Tough’s use of the word “stuffing” in relationship to talking to and reading with young children.)

Tough cites research that was new to me. Mary Ainsworth conducted studies in the 1960s/early 1970s. She found that: “Babies whose parents responded readily and fully to their cries in the first few months of life were, at one year, more independent and intrepid babies than babies whose parents had ignored their cries” (cited in Tough 33). This may seem counterintuitive but having been that kind of parent with my own infant daughter, my experience has borne out that finding. She became a VERY intrepid toddler and grew into a VERY independent woman (now in her mid-30s).

My question here is if babies are born into struggling families, does the parent who is working two jobs have the energy to respond “readily and fully” to a baby’s middle of the night cries?

Tough also writes about cognitive-behavior therapy and cites the work of Martin Seligman, author of Learned Optimism, which I haven’t yet read. According to Seligman, the best time to transform pessimistic children into optimistic ones is “before puberty, but late enough in childhood so they are metacognitive (capable of thinking about thinking)” (91).

For me, this emphasizes the importance of the middle school years. I believe middle school educators benefit from specialized training in adolescent development and empathetic skills in order to effectively support young teens social, emotional, and cognitive development. (I worked with some very “gifted” classroom teachers at Emily Gray Junior High who had what it takes during my one year of middle school librarianship.)

My experience supports the importance of optimism and other positive emotional states when it comes to learning. As researcher David Sousa noted positive emotions affect learning by helping students process information, engage in difficult tasks, develop a deeper understanding of learning experiences, and recall and apply what is taught later on (2016).

Tough analyzes the character education program at  KIPP Schools. In order to prepare KIPP students for college, students are given a college persistence rating in four categories: academic preparedness, financial stability, socio-emotional wellness, and non-cognitive preparedness. This score is monitored regularly and educators/counselors provide support and interventions to keep students on track. The success rate for less-privileged students who attend KIPP schools and go on to succeed in post-secondary education suggests “character” counts.

Tough concludes: “Character can function as a substitute for the social safety net that students at Riverdale (a high school serving privileged students) enjoy – the support from their families and schools and culture that protects them from the consequences of occasional detours and mistakes and bad decisions” (103).

In summary, Tough writes: “Character strengths that matter so much to young people’s success are not innate; they don’t appear in us magically, as a result of good luck or good genes. And they are not simply a choice. They are rooted in brain chemistry, and they are molded, in measurable and predictable ways, by the environment in which children grow up” (196). Agreed. Agreed. Agreed.

I learned a great deal from reading Tough’s book. I highly recommend it for anyone interested in child-adolescent development and education.

Writing this review has helped me further reflect on the complexity of creating an environment in which future-ready children and teens can development the knowledge, competencies, and dispositions they need to succeed. In my hybrid view, the combination of family economic security, the “cognitive hypothesis,” and the “character hypothesis” could all be applied to create a supportive and effective birth through adolescence environment for children to succeed.

Why not imagine and create the best of all possible worlds for our children?