Earlier this week, I introduced a couple of fun picture books that I found at the ALA conference in San Francisco. Today I will highlight a few more children’s books that have a direct curriculum connection. 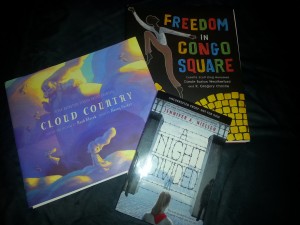 First, some science: Like many people, I have fond memories of laying in the grass on a warm summer day watching the clouds turn into recognizable shapes. Cloud Country, by Bonny Becker, brings us back to those summer days. Gale is a young cloud who loves to gaze down from the sky and watch humans. It turns out (spoiler alert!) this is a rare trait in clouds – not many of them have the imagination needed to watch humans and make shapes humans can identify. Gale is indeed special! This fun picture book with illustrations by Noah Klocek, a Pixar animator, if full of meteorological words. This would be a fun addition to a primary grade weather unit. The perfect companion book would be It Looked Like Spilt Milk, by Charles Shaw. An oldie but goodie!

Now let’s look at a couple history titles. I freely admit that I should have paid better attention in history class as a student, but these two books introduced me to history that I had never thought about. They look at moments in history from lenses that are not often used in history books and provide something new for students to consider.

Let’s go to New Orleans in Freedom in Congo Square, by Carole Boston Weatherford with lively illustrations by R. Gregory Christie. In 18th century New Orleans, Sundays were holy and even slaves were given Sunday afternoons off of work. Slaves and free people of African descent would gather in Congo Square to share stories, traditions, music, and dance. In Congo Square, they could temporarily put aside their struggles and celebrate their culture. “Congo Square kept African music and dance alive in New Orleans, never really dying out.” (Branley). A foreword by historian Freddi Williams Evans provides additional information about Congo Square. This is a great addition to the study of African American history and culture or the roots of jazz music.

How many times have we read about and taught lessons related to World War 2 and the Holocaust? There are so many great books that describe this horrendous time in world history. However, I do not remember reading a book about a child in East Berlin as the Berlin Wall was being built. A Night Divided, by Jennifer Nielson is that book. 12-year old Gerta lives with her family in East Berlin. She knows tensions are high, but she is shocked to wake up one morning to a new fence on the border between East and West Berlin. She is even more saddened when the fence is replaced by a wall, and her father and brother are one the other side. As I read this book, I found myself wanting to know more about this time in world history. I remember the wall coming down in 1989, but I had never given thought to when it went up and the lives of the people living behind the wall at that time.

I would have done so much better in high school history if it had been told through these and the many other amazing children’s books that are out there now!